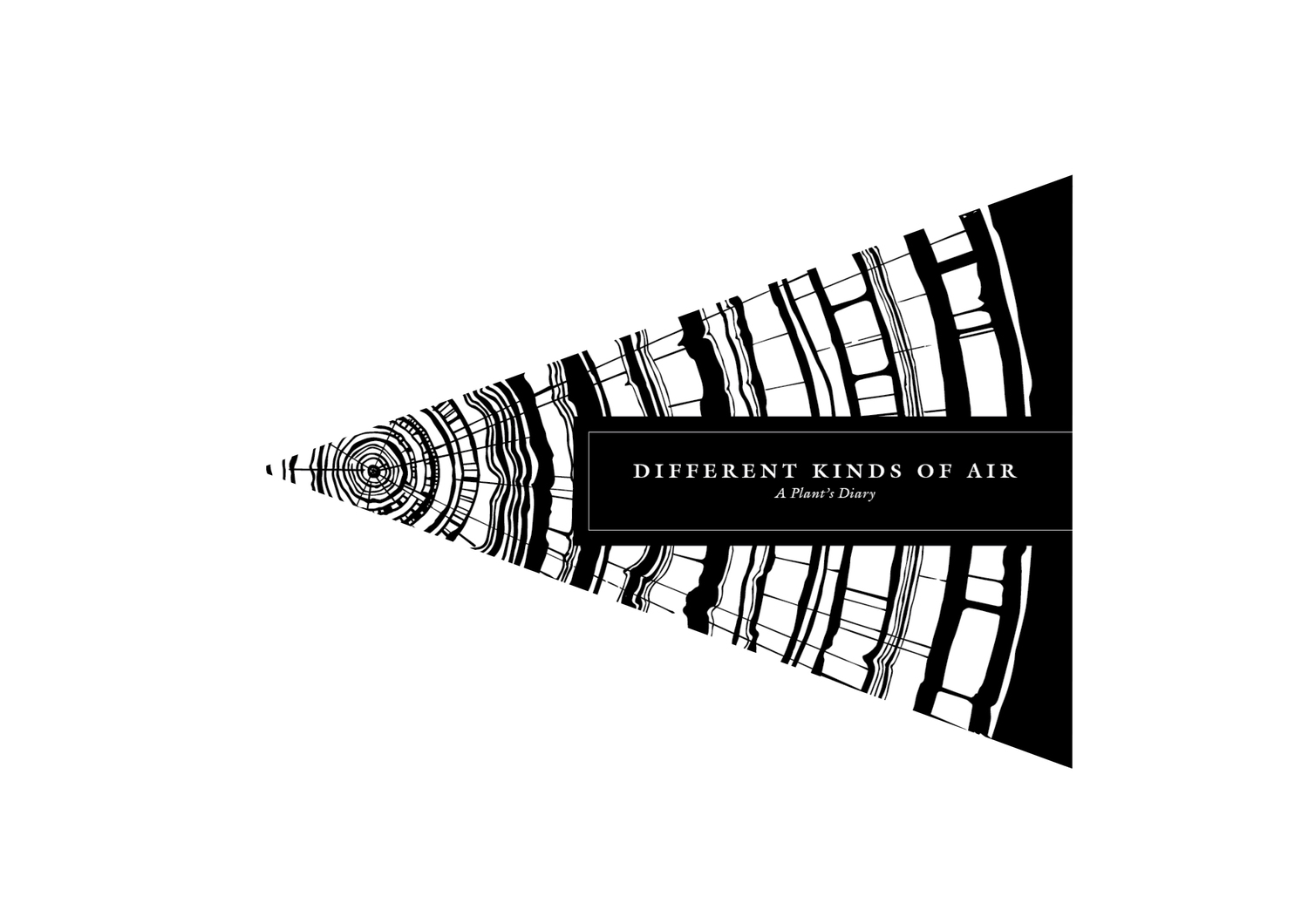 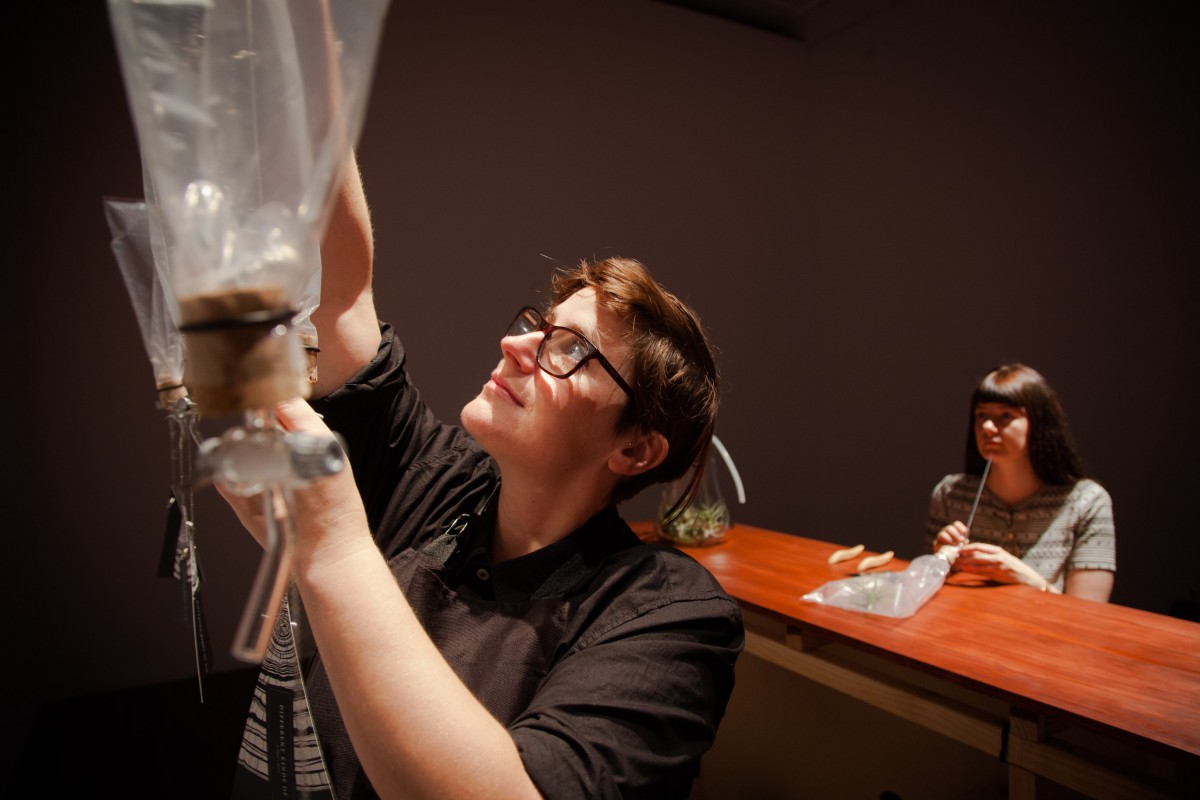 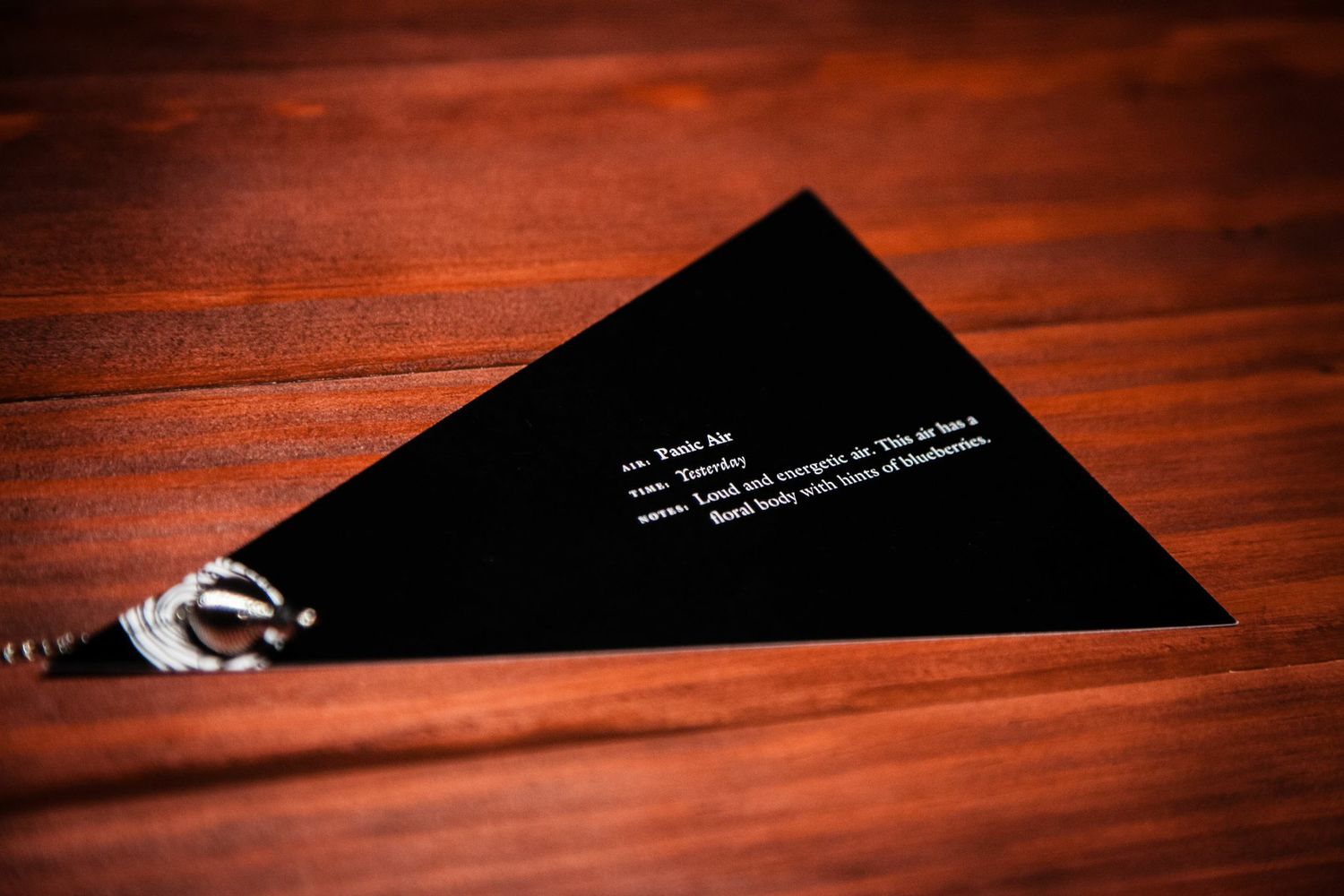 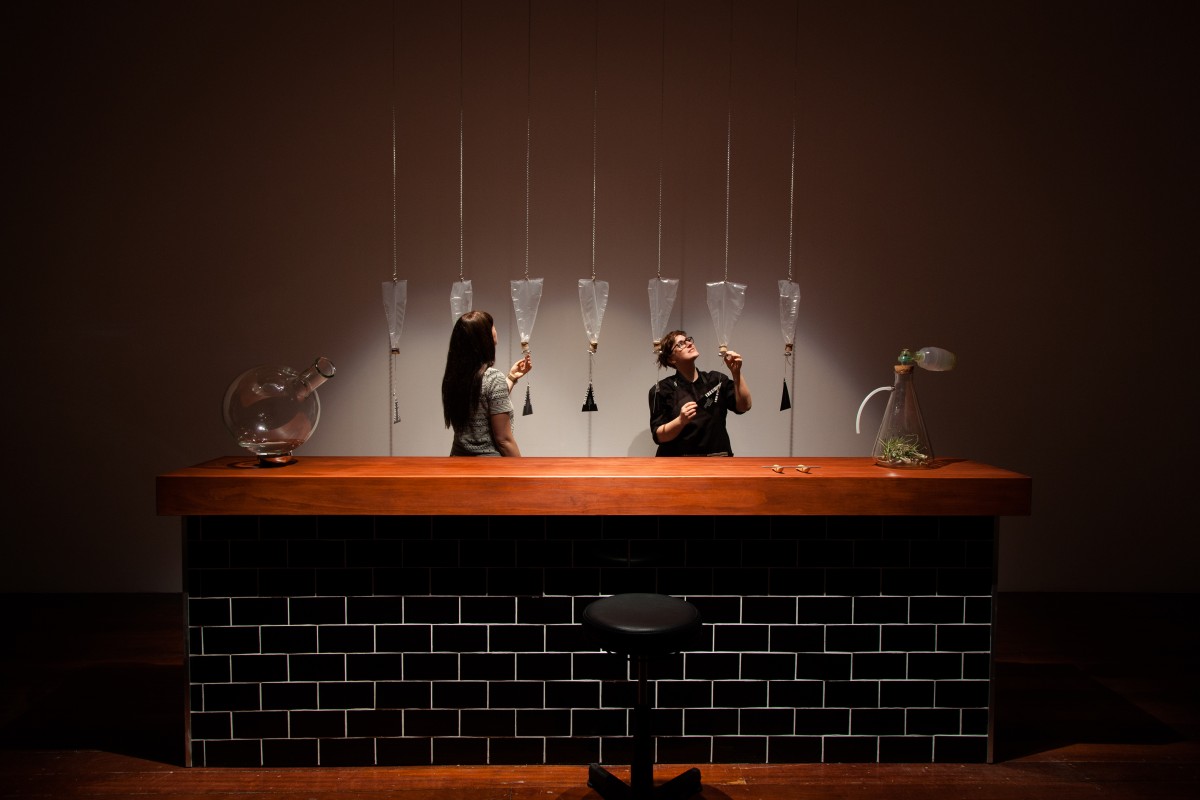 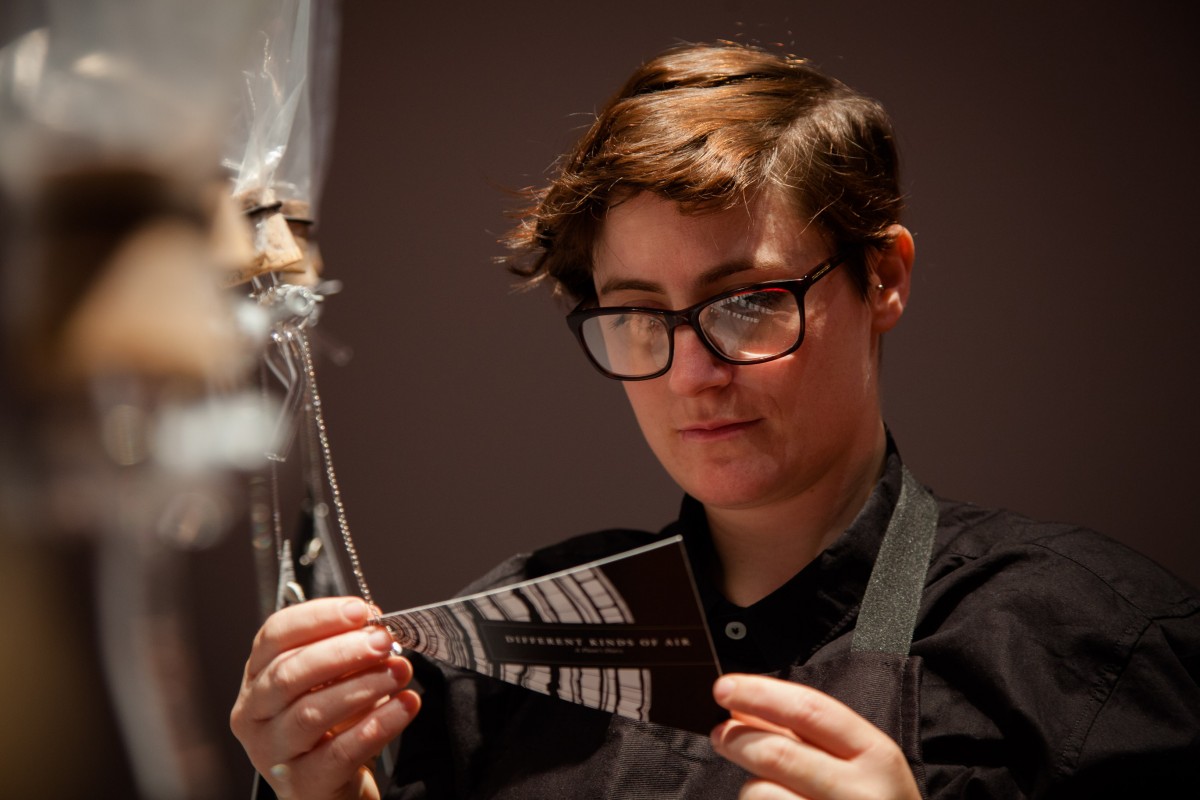 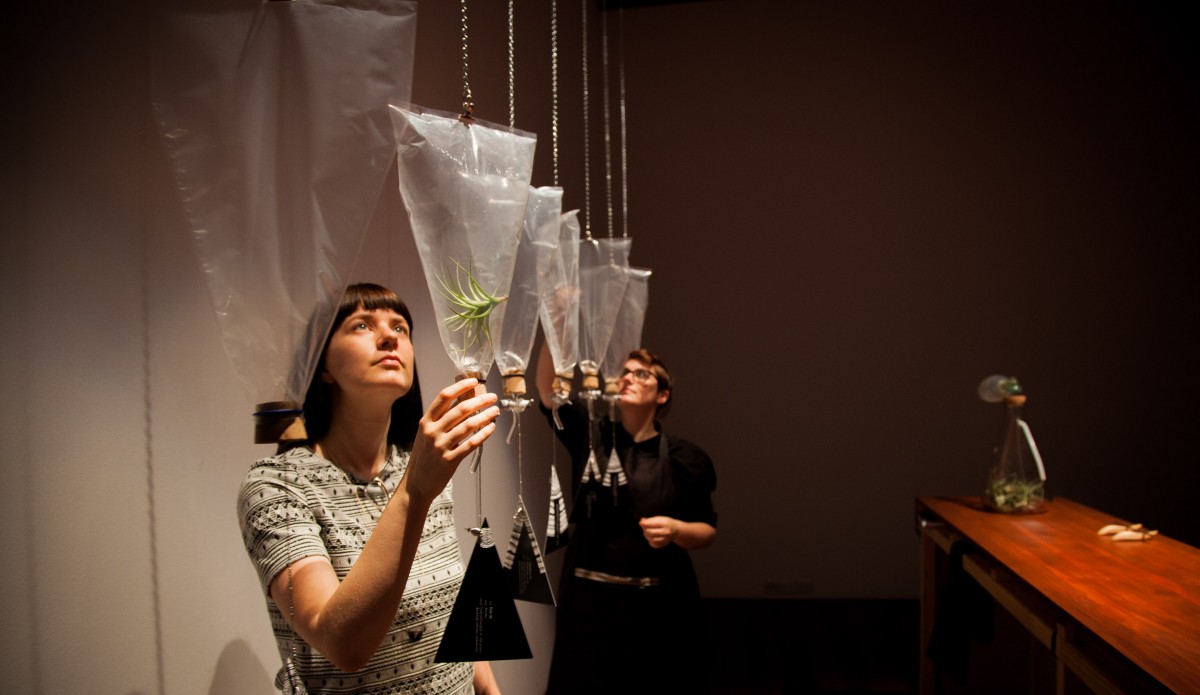 A Plant’s Diary：Different Kinds of Air

300-350 million years ago oxygen levels were nearly double what they are today, supporting mega flora and fauna. 252.5 million years ago, the Earth experienced the greatest extinction event with 93-97% of species on land dying out and a simultaneous spike in carbon dioxide levels. The history of the atmosphere on Earth is inexorably linked to the history of life.

“Different Kinds of Air, a Plant’s Diary” offers the audience the opportunity to taste the air from some of these different eras in Earth’s evolution. The gaseous composition, temperature, taste, and smell of air has changed drastically over the course of geological history, these differences affect human physiology, emotional states, and consciousness.

What do these air taste like? How do they make you feel? How do they affect your body, your consciousness and your memory?

The Great Dying, 252.5 million years ago

This air is from the greatest extinction event in the history of life on Earth. 252 million years ago 93-97% of all species died out, of those that survived evolved the Dinosaurs of the Triassic age. The period is known as The Great Dying. It coincides with a dramatic spike in carbon dioxide and methane in the air, oxygen levels plummeted below half what it is today transforming the aerobic conditions for life on Earth, and acidifying the oceans: life on Earth had altered. Temperatures at this time jumped around 10 degrees due to the high volume of greenhouse gases. This time coincides with vast volcanic eruptions that leaked carbon dioxide and sulphur, and the melting of Siberian ice fields, emiting large amounts of methane. The change spiked over just a 20,000 year period (the blink on an eye for the Earth).

Carbon emissions are steeper today than at the time of The Great Dying; this air is the past, but also a possible future.

Carboniferous Air, or the Air of the Giants, 300-350 million years ago

This is from a time when trees invented their own trunks around 300-350 million years ago. A molecule called lignin evolved and became hard enough to support a trunk. Trees got bigger and bigger and oxygen increased to nearly twice what it is today. Oxygen is heavier than nitrogen so the air pressure was higher, this combined with the higher energy in oxygen allowed an era of giants to evolve: giant trees, giant spiders, and giant dragonflies. Fossils have been found of dragonflies with the wingspan of 75cm. The oxygen was so dense that a few % higher and the forest fires would have engulfed the world. It’s an energetic air that gives you a lift.

Future Air, about 16 generations in the future

A small button that, when pressed, releases “future air” over your hand, and down your arm. Or you may choose to breathe it: a visceral connection with the future of air.

Future air is not about a speculative future. It is literal. This air is a stable compound molecule that will exist in our air for the next 12-16 generations before being broken down. It does not occur naturally, but is human synthesised, made in a lab for application in industry.

Future air is sensual; it’s about six times heavier than the air that we’re used to breathing. So heavy that were you to breathe it in, your words are literally heavy as well, they dribble down your chin and drop to the floor. When inhaled, it lowers the voice: a sonorous gravity.

The air is also the most potent greenhouse gas that has yet been tested. It has the warming potential of 24,000 times that of carbon dioxide.

The immediacy of this air in the gallery presents a real choice between desire, curiosity, and play, and the sensation of responsibility and connection to the future of air: a human-made future.

Emily Parsons-Lord makes ephemeral installations and performances that are informed by research and critical dialogue with climate sciences, natural history, and politics. Her work attempts to reconcile lofty vast infinities of our place in time and space, and the slippages to the political realities of being a human today in discourses of climate change. Employing tragi-humour, scale, and performance, Emily interrogates the materiality of invisibility, magic, and stories we tell about reality.

Based in Sydney, Emily’s recent work includes recreating the air from past eras in Earth’s evolution, recreating starlight in coloured smoke, multichannel video, and experimenting with pheromones, gallium, explosions, and chemistry. She has exhibited both nationally and internationally and participated in the The NSW Visual Arts Fellowship, 2017, Bristol Biennial – In Other Worlds, 2016, Primavera 2016, Australia’s flagship emerging art exhibition, Firstdraft Sydney, and Vitalstatistix, Adelaide.