The Water Harvest is a socially engaged installation-based artwork that celebrates the seemingly small acts of Melbournians collecting rain/grey water in an effort to become more resilient to the impact of reduced rainfall and drought. The artists invited water conscious Victorians to contribute water saved around their workplace or home to be included within the installation; by collecting a sample, the contributors name and their address. The artists calculated the water’s geographic origin and etched this into the bottle along with the water harvester’s name. Presented in an illuminated installation, the bottles act as markers on a map of a landmark shift in collective attitude and awareness towards preserving Melbourne’s natural resources to create a resilient and sustainable city. The Water Harvest explores how Melburnians can create a man-made catchment to feed back into the water system.

This is reflected in the connection between the two works within the space as they overlap they create a visual representation of how the natural and man made can work in collaboration, creating a sustainable super ecology. 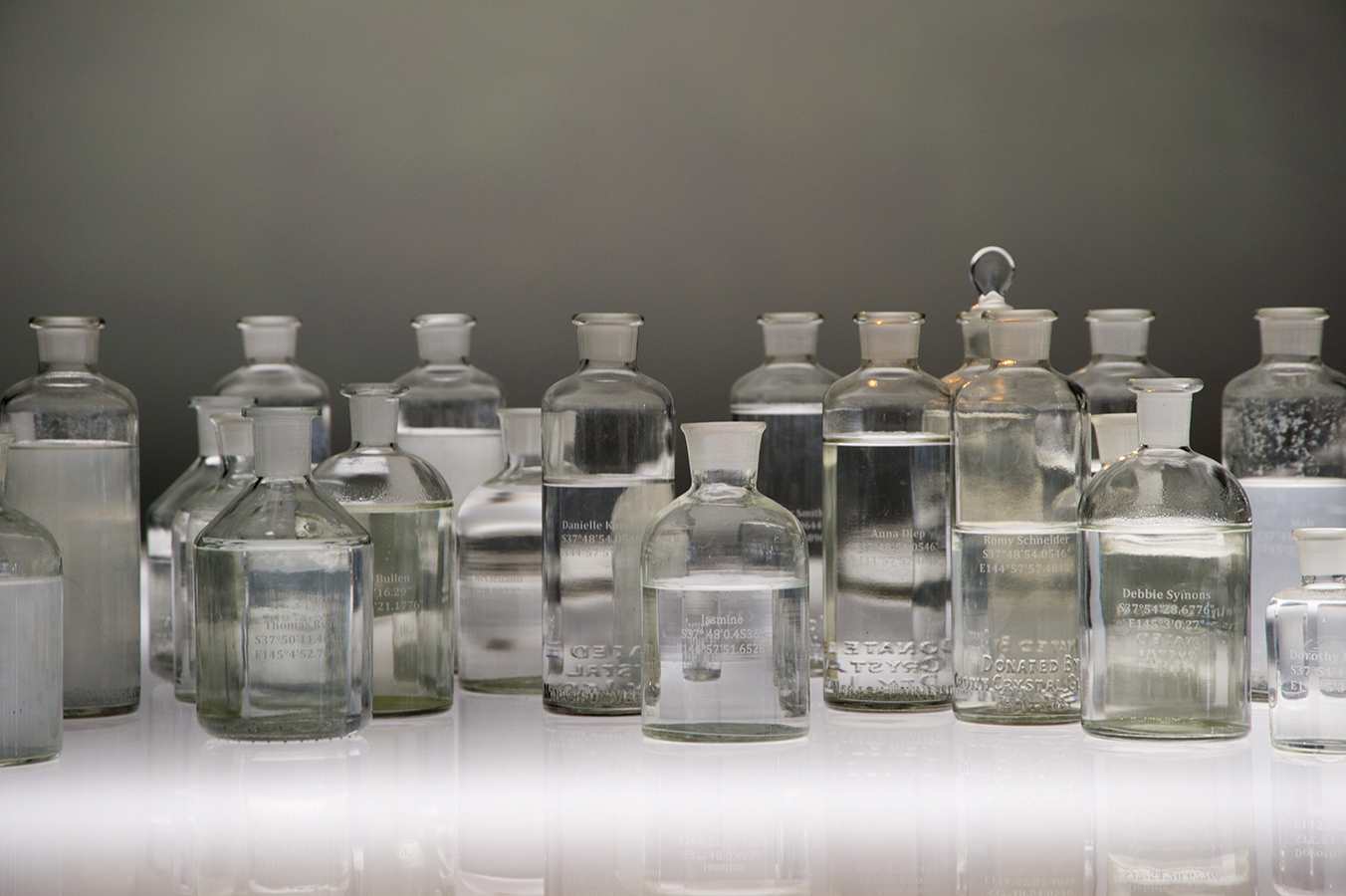 At the end of the exhibition, the artists gifted the artwork back to the community to thank every individual for consciously contributing to the sustainability of Melbourne’s water. 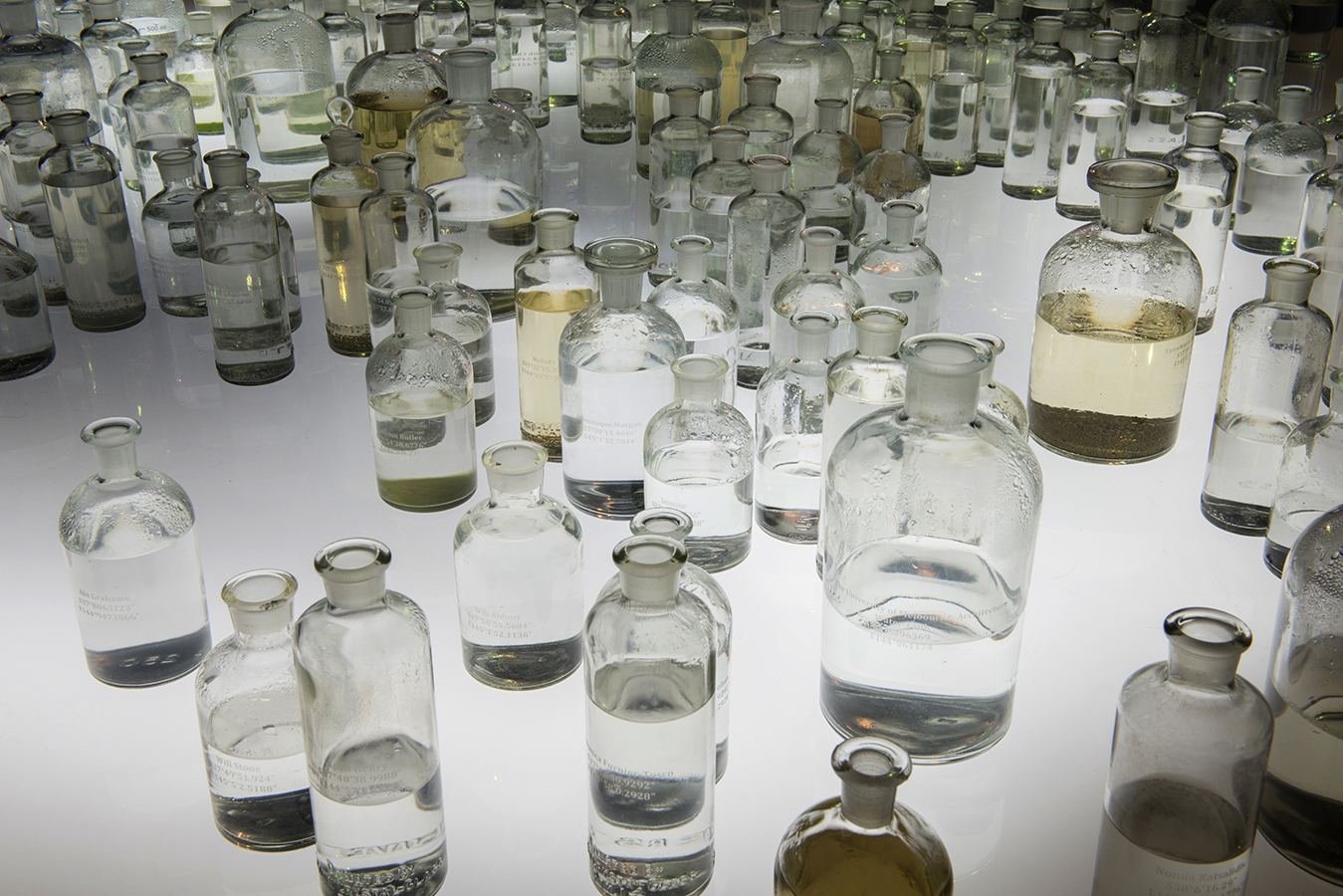 The Water Harvest was exhibited as part of The Catchments Project during the first studio-based artist in residency program at Creative Spaces Carlton Connect Studio, LAB14.

Sing is an outcome of Debbie Symons’ recent international Labverde [1] residency in Manaus, State of Amazonia, Brazil. The LABverde program is designed to develop innovative studies in the cultural field in conjunction with a team of arts, humanities, biology, ecology and natural science specialists.

During the residency, the artist explored terrain and aquatic environments, which were incredible and breathtaking. However, it was in the marine environments of the Amazon Rainforest, where one species and their homeqs truly enthralled her. The Yellow-rumped Cacique [2] bird and the precarious suspension of their nests hanging over the flooded forests within the Amazon jungle. The nests of this species hang high in the tree canopy, hanging above waters containing predators that are both mysterious and threatening; the piranha, vampire fish and the anaconda. The Yellow-rumped Cacique nest is a pendant nest shape. This structure is a common nest form of many tropical bird species, including birds from the oropendolas [3], orioles, weavers, sunbirds, and caciques families who weave elongated nests with pliable materials such as grasses and plant fibres suspending their nests from branches. These listed species are predominantly found in equatorial regions in South and Central America, Africa to the Middle East, South-east Asia, Southern China and Northern Australia. Many of these regions listed above have witnessed an explosion of deforestation with native tropical rainforest felled and cleared replaced with homogenous rows of oil palms in the past 30 years.

In 2018, the tropics lost 12 million hectares of tree cover [4]. And in 2019, the tropics lost another 11.9 million hectares of tree cover [5], equating to losing a football pitch of primary rainforest every six seconds.  Rainforests are biodiversity hotspots, with more species found within these niche environments than anywhere else on the planet. Rainforests also capture and store gigatonnes of carbon dioxide, which is released during deforestation events. The nests exhibited in Sing are reflective of the cacique nests, both in texture and colour. However, rather than being made of indigenous Amazonian flora the nests in Sing, are created with African palm oil fronds – a plant being cultivated as an industrial, agricultural crop following the clearing of tropical rainforests globally.

The work seeks to explore emotions of loss and wonder and initiate reflection. It questions the audience to consider the intricate lives of rainforest birds and the rich biodiversity they are part of and challenging where tropical bird species will thrive when their native environment is removed through deforestation?  Palm oil plantations are a byproduct of deforestation, and they grow on lands that were once places sustaining the richest biodiversity on the planet. They are homogeneous environments, void of spaces in which tropical birds would find food to sustain a population, nor suitable places to suspend their nests. Hence the materiality of the nests in Sing is vital in the conservation of tropical species survival. Humankind’s removal of wild spaces is a significant element in what scientists are calling the sixth mass extinction event in which we are currently witnessing across the globe. [5] We Lost a Football Pitch of Primary Rainforest Every 6 Seconds in 2019, Mikaela Weisse and Elizabeth Goldman, June 2ed , 2020

Debbie Symons practice is multi-disciplinary. Her work addresses a range of themes, including humanity’s complicated relationship with the natural environment, the dynamics of the global political economy and the effects of consumer culture. Symons collaborates with scientific organisations to inform her work, such as the IUCN Red List. In 2018, Symons attended the prestigious LABverde residency in Manaus, Brazil and in 2019, Symons was awarded the Copyright Agency’s CREATE grant to create Sing.

Born in Melbourne, her formative training was at Victoria College Prahran (VCA) in the fields of painting and printmaking. Symons completed her PhD, Anthropocentrism, Endangered Species, and the Environmental Dilemma, at Monash University in 2014. She is an Associate in RMIT’s School of Art, College of Design and Social Context. Symons’ works have been shown internationally and nationally; International Urban Screens Association, Galerie Prodromus – Paris, The Streaming Museum – New York, ZAZ10TS – Times Square in New York City, Bayside Gallery RMIT Gallery, [MARS] Gallery and Linden New Art. In 2015, she travelled to Paris as part of the Australian representation in ARTCOP21. 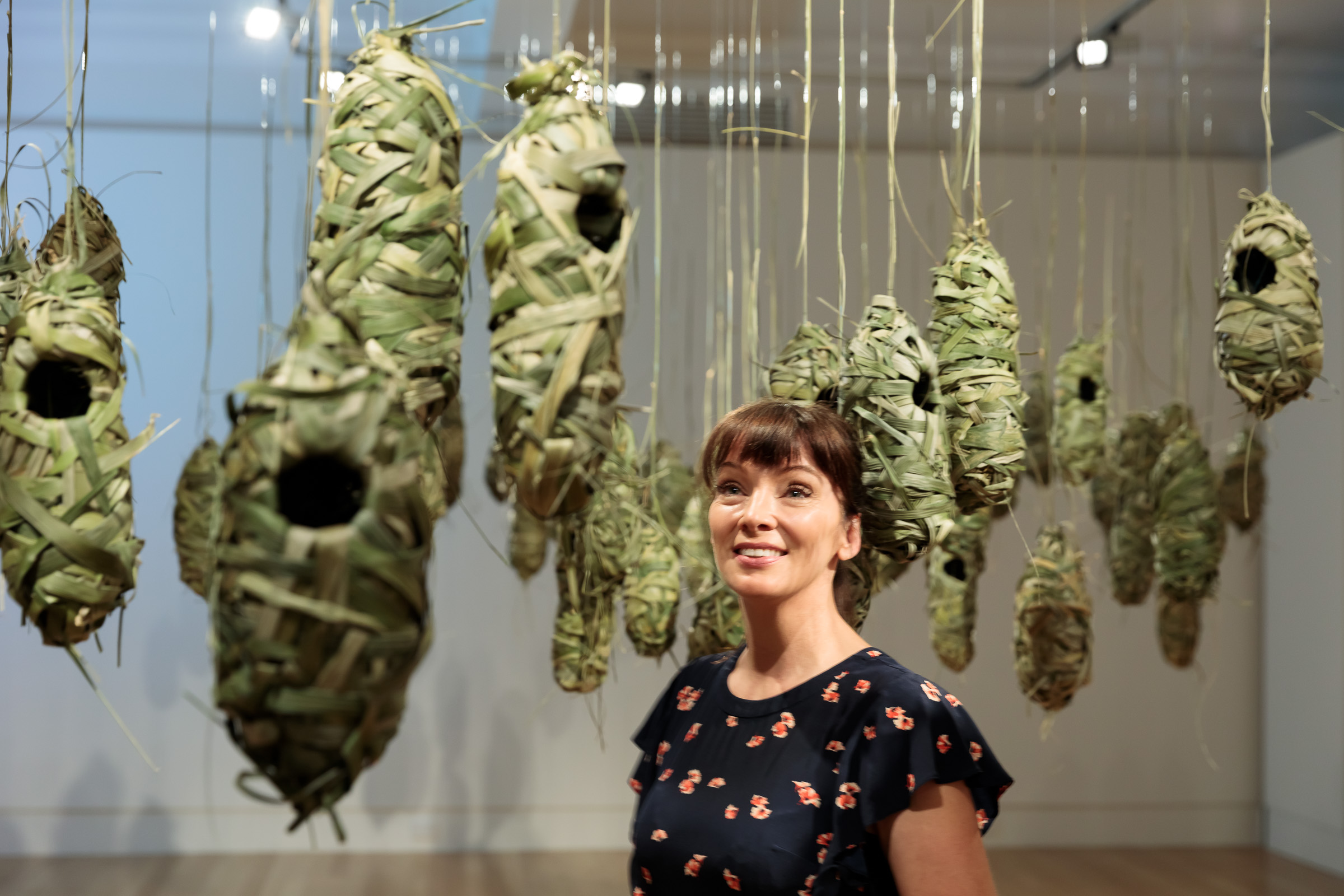 Many thanks to Debbie Symons for her support and authorisation of this article.

This article is for exchanging and sharing only. The copyright of image, context, audio and video belongs to the original author.