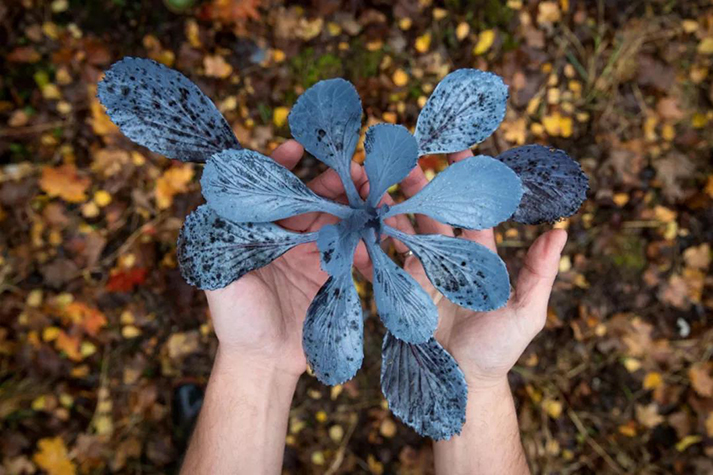 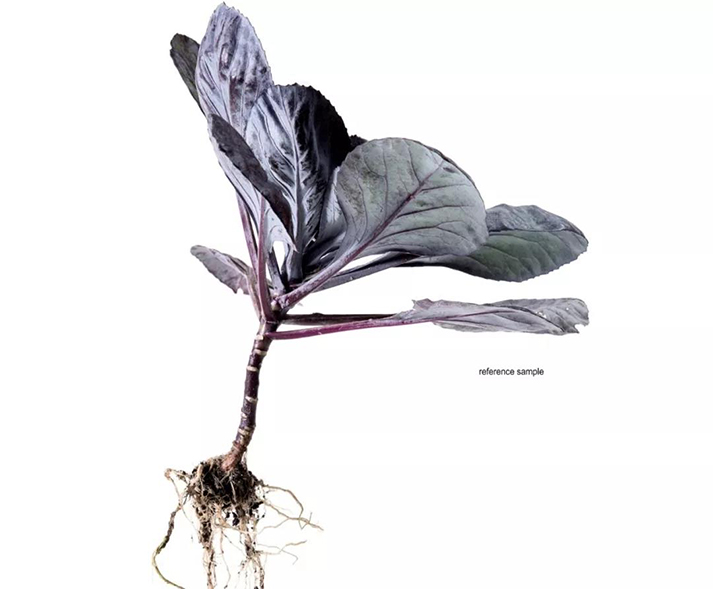 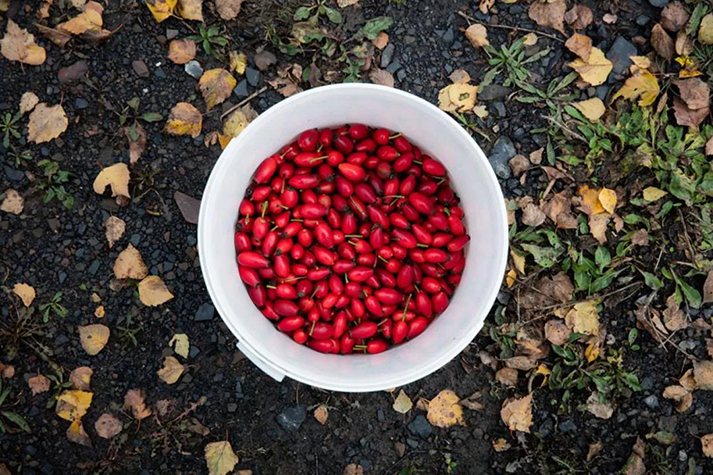 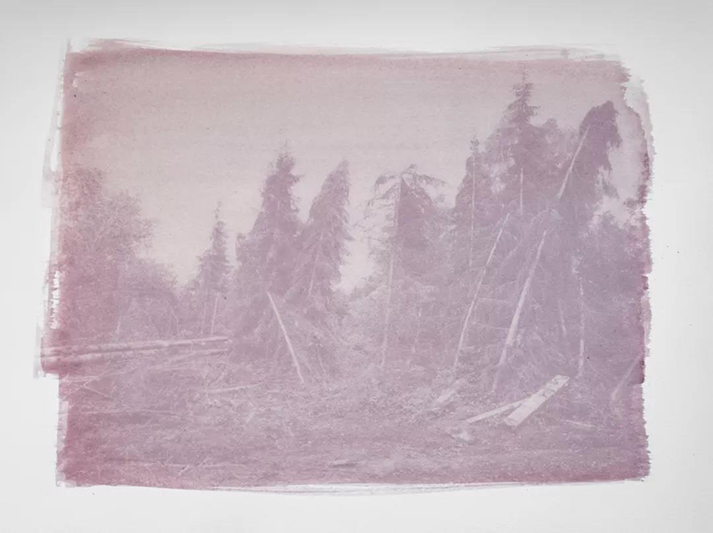 Kristof Vrancken is based at the LUCA School of Arts in Genk, where he is active as a researcher and teacher in Experimental Photography and Hybrid Media. He is currently preparing an artistic PhD dissertation on strategies to protest against the Anthropocene through Photography and Participatory Design Processes. In his most recent work Vrancken not only uses the Landscape as a passive subject but also as an active ingredient of his work. By developing his tactile pictures with local plant extracts he strengthens the relationship between the physical place and the image.

In my artistic research project ‘The sustainist gaze’, I examine the link between photography and Sustainist Design. The latter is a movement that argues in favour of design processes with a focus on ecology, innovation, craftsmanship and sustainability within a strong social context. Regarding photography from this perspective made me doubt the self-evidence of my own predominantly digital work process and prompted me to return to ecological and traditionally analogue processes that were at the root of the discovery of photography.

One of these processes is the anthotype described by Sir John Herschel in 1842. It is an organic process that affects the discolouration of natural pigments exposed to UV light. An anthotype is created by applying a photosensitive emulsion made from the colour pigments of plants, berries and flowers to a and exposing it to sunlight for several days or weeks.

In my project, I approach contemporary topics from the perspective of this old technique. One of these topics is to photograph polluted areas using the anthotype process. What makes these images unique is that they are created using plants from the location itself. In other words, the landscape contributes to the final image and, in doing so, adds a deeper layer to the work. An anthotype print is not a snapshot, but rather a tactile recollection of a moment in time that slowly fades, while continuing to carry its history and message with it.

mijnKOOL is an artistic participatory research project in which photographer Kristof Vrancken and design studio SOCIAL MATTER actively and naturally examine the Genk soil quality and composition using red cabbage. For this, they invite 12 Genk residents to plant a red cabbage in their garden and bring them together to let them experience the unprecedented properties and forces containing plants.

Plants can play an important role in detecting soil structures and properties. Red cabbage works well as a bio-indicator. In neutral ground red cabbage gets a purple color in acid soil it becomes red and in an alkaline environment it turns out more green or yellow. During several meetings the participants came together to discuss the growth of their coals and to exchange tips.

In October the participants created a photographic emulsion of their crop, which  resulted in their portrait. Depending on the acidity and composition of the soil in which the cabbage has grown will change the colour of the print. The use of red cabbage as a measuring instrument for soil composition gives an understanding of the impact that soil may have on ecology and food-production.

Kristof is currently investigating the further possibilities of demonstrating the effects of soil and air pollution using this method. Red cabbage plants which were planted in polluted industrial areas already showed signs of oxidative stress, while these were absent from plants in more residential, non-contaminated areas.

mijnKOOL is a project Kristof Vrancken and Giacomo Piovan in cooperation with the city of Genk, the Emile Van Doren Museum and C-Mine

The title “Transit” refers both to the many evolutions -from nature to industry- that the landscape of the mining town of Genk (Belgium) has undergone since the introduction of the first Industrial Revolution, as well as to the name of the van which was manufactured in the Genk Ford factory between 1960 and 2000. The factory closed down in 2015, leaving more than 4,000 people unemployed and a polluted wasteland to be reconversed.

The “Transit” series depicts the evolution and history of the Genk landscape using the 19th-century anthotype process. It consists of 9 photographic prints made with an organic emulsion from plants and berries which were harvested from the location photographed. As an result, an interesting relationship between the physical landscape and its photographic representation emerges.

The anthotype print not only REPRESENTS the landscape, it IS the landscape since it is made from the flora that grows there. The long exposure time, the entropy, the tactility, the connection with nature, and the ability to incorporate what was photographed in the print, enable the anthotype to open up a number of layers of meaning that remain irrevocably closed to digital photography.

Because plants are more and more affected by environmental stresses, especially by the devastating consequences of pollution and climate change, the anthotype acts as a suitable tool to illustrate the narrative of the Anthropocene. The technique is also a means of raising awareness of it and of reacting against this. Further scientific research will have to show the exact level of concentrations of heavy metals that will nest within the final image. In other words, I use one of the oldest photographic methods as an appropriate instrument for addressing an urgent contemporary topic and to capture the history of a landscape in the picture itself.

Kristof Vrancken researches “natural” methods for developing photos. He has experimented with the anthotype procedure, which uses purely natural ingredients.

By developing photos using local plant-based colours, in particular from the flora of the location photographed, Kristof Vrancken establishes an interesting relationship between the physical landscape and the photographic image. He elicits an awareness of time, local resources and the developments processes, thereby presenting a critical counterweight to the contemporary snapshot culture.

During Manufactuur 3.0 Kristof Vrancken will develop a new photographic emulsion based on historical recipes and starting from Hasselt gin and local berries and flora. Referring to 18th and 19th century traditions to make homemade liquors, a new and drinkable photographic emulsion will be created, searching for a balance between image and taste.

Kristof Vrancken has invited a number of designers to participate in a micro-residence in his studio during Manufactuur 3.0. He invited Veerle Tytgat, Jenny Stieglitz, Pablo Hannon, Andries Vanvinckenroye and Giaocomo Piovan (Socialmatter)

Strain is a force that pulls or stretches something to an extreme or damaging degree. At the same time it also means “draining or sifting a substance.” “

The images portray the damage caused by a severe storm that befell the Haspengouw landscape. Haspengouw is very dependent on fruit farming and a storm of this scale is disastrous for the farmers who lost an entire harvest and their trees. What we see here is the interaction between man and nature.

The Haspengouw landscape is a functional landscape full of orchards, fields, et cetera. It is nature arranged into plots. It’s as functional as possible. Structured to increase yields. The storm upsets the entire arrangement and changes everything into chaos and turmoil. Severe storms will increase in frequency in the future due to global warming, and the landscape will be under even more pressure.